The movie Thank You for Smoking had a clever epilogue ending. After a career putting a positive spin on the negatives of tobacco, the main character is shown training board members how to spin cell phone radiation. The truth, of course, is mixed: it isn’t whether or not there IS any radiation, only how much. Additionally, it’s also a fact that the harder a cell phone has to work to hold a signal, the more it has to boost the signal (ie increase the radiation) to serve the whim of its master.

Now with Apple’s so-called “antenna-gate” crisis, Steve Job’s said that all smart phones were subject to this. In other words, if the user holding the phone covers enough of it using a “death grip,” the smart phone has to fight by boosting the signal (and in the case of the iPhone, drop it if it can’t boost it enough.) An independent company, Tawkon, has created an app to demonstrate the effect and predict the radiation output based on the clarity of the signal, whether caused by being in a bad location or holding the phone like a kung fu master. This video demonstrates the effect… interesting stuff, eh?

According to an article on Wired.com, collecting the information that allows a filter to compare an image, a book, a song, or a video to existing material is itself an uncompensated use of the material it is meant to single out for violation. In other words, even “fair use” isn’t enough of a reason for website to police themselves prior to actual notification by a copyright holder since the website would have to have legal copies (aka paid for) of everything being filter to compare it to.

If this holds up, no website can currently be held responsible to filter its own bandwidth for violations because they would have to purchase and own a copy of whatever is being searched for (read: everything and anything) to check and see if it’s real. Ha!

Have you heard of the Bloom Box? How about the Oorja fuel cell? While so-called green technologies such as solar, wind, and wave power are still noisy, expensive, and inefficient compared to even the worst fossil fuels, simplified energy conversion systems that squeeze out cheap energy with amazing efficiency are starting to pop up, and the idea that a fuel-celled electric car is sounding less like hype and sooner than later.

Imagine a 5-kilowatt cell that takes up half the space of the battery packs in a Toyota Prius. Instead of a plug-in vehicle, you’d have one similar to your gas-powered grill. Pull into a station, disconnect your spent cell, buy a new one (and get your deposit for the old container applied), hook it up and off you go for another 1000 miles or more. Not too shabby, and no need to worry about forgetting to plug in your car before going to bed.

… what do you think of Apple’s new iPad?

Update: After reading up on what this iPad does, it’s getting harder to laugh at the name. For example, if you bought yourself a Kindle, eBook reader, or any netbook for Christmas, go ahead and kick yourself now (or see if you can get your money back with the receipt.) Seriously, if you could have everything in an iPod Touch the size of a netbook screen without the keyboard and a 10 hour device time, why wouldn’t you?

I understand why hosting companies buy other companies, and I also understand that from time to time you need to move things to a new server (kinda like copying all your pictures and video to a new hard drive for safe keeping.) Sadly, any time this is done with a dynamic website (aka database driven), there is always the possibility of a glitch or failure.

So here I sit, everything backed up as of last Friday, fingers crossed, waiting until Saturday morning to ensure everything still works. And if not, I may have some serious work ahead of me.

Pigs in Minnesota have reportedly tested positive for the H1N1 virus, previously called “swine flu.” Of course, to be strictly and politically correct, people have been told not to call it swine flu because mundanes might associate it with potentially tainted pork products. Ask THIS kid: 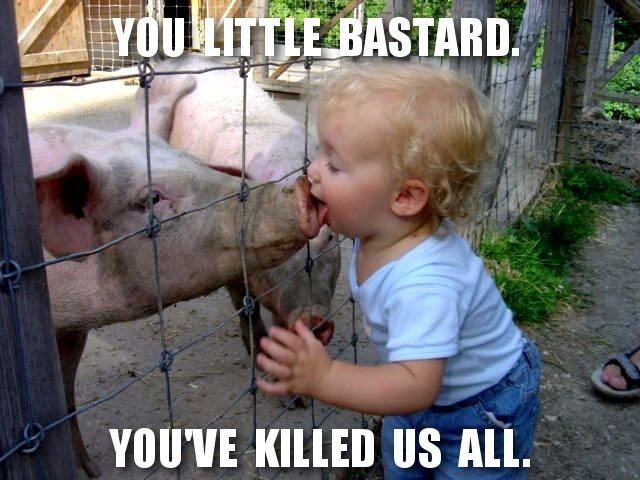 While Apple has yet to deny or confirm, a few owners of the new iPhone 3GS have complained about the device heating up, even to the point of warping the plastic and discoloring the white-backed phones. There have been problems with batteries in Apple devices before (Sony-made batteries, to be specific).