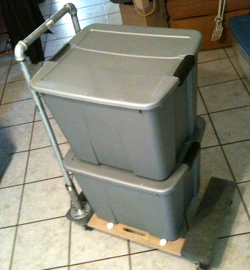 Something I didn’t update here was when I completed my original “Taj MaHAUL.” With the ideas started in Part I of this idea, I needed something with storage, easy to break down and travel with, and easy to move in and out of a convention haul. Anyone who has been in marketing or had to travel with a display system knows what I’m talking about. In addition, I also needed an on-board crafting kit: scissors, tape, stapler, pens, paper, first aid kit, whatever.

The result is pictured here: the Taj MaHAUL I. Two medium sized and stackable plastic bins on a modified furniture mover with a removable handle. Inside is a series of smaller bins and bags with everything needed to set up a display. I’ve used it for a couple years now, and it has served me well (the bin is large enough to move a 20-inch LCD computer monitor if required.) The look on other presenters faces as I’ve easily brought this in, set everything up, and easily took everything away has been both amazing and hilarious, but it’s just the way I think.

One thought on “Building the Taj MaHAUL, Part II”