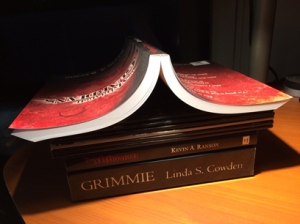 A few early Sunday thoughts with an eye toward writers.

First: “be careful what you ask for.” If you ask for a critique and you’re lucky enough to get one, treat it for what it is: another person’s opinion. The goal should be to improve your craft, so while you may not agree with the person’s feedback, there is a reason why they had it. Sure, maybe they’re a troll, but that’s easy enough to spot much of the time.

Second: “don’t take criticism as a personal attack, even when it is.” I come from a unique perspective since I honed my narrative voice in film critique before I seriously plied my trade as a fiction writer. My critiques have improved in the same way as my writing, an attempt to equally praise and point out needful improvements.

A writer wears many hats, but long after the idea, research, plotting, writing, editing, polishing and marketing, someone is going to read your work and your mind will be naked before them. It takes a lot to put yourself out there, and in today’s social media, people associate the author with the work – YOU ARE YOUR BRAND. Your fan base will not just remember your work but also you and how you acted, so unless you can elevate character assassination to an art form, be warm, be generous, and be humble.

And remember: thou art mortal…even while we play God with our pens.