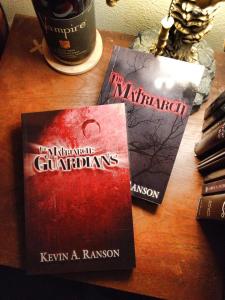 Now that The Matriarch: Changeling has published in its final form, I can share a few ideas.

It’s probably my worst-kept secret: The Matriarch was never intended to be a series. I left a few questions unanswered because I had told the story I wanted to tell: when you’ve lost everything (your dreams, your life, your best friend), how do you go on? The main character Janiss finds a way, but the story doesn’t end with “happily ever after.” How could it? The ending was intended to be satisfying, but it still leaves the mystery of “what might happen next?” with little more than “you decide.” I ended up tricking myself; I started to think about exactly what the continuing story would be and realized I wasn’t finished.

Why four planned books instead of a trilogy? A tetralogy isn’t uncommon in fiction, but the truth is I WAS writing a trilogy…if you envision the original novel as a prequel: “Janiss Begins,” making the second, third, and fourth books a “sequel trilogy” to the first novel. To continue her story and her growth as a character, she couldn’t do it alone, especially after all the deaths and demise in the original novel. Janiss had accepted becoming a vampire and resolved to exist as one, but she hadn’t yet accepted the full responsibility and legacy that Louisa had left for her. The Matriarch: Guardians is about her stepping up to become a protector and making decisions, to accept her role as a leader.

Isn’t a changeling a fairy child secretly swapped out for the real one? Yep, but like many ideas in this novel series, the use of the term in the title The Matriarch: Changeling is a metaphor. In continuing her story, Janiss has grown comfortable at Cedarcrest Sanctum; it’s easy to be a “good” vampire when all your needs are catered to, but what do you do when all of that is gone? The interesting part of the third novel to me is that no one even knows Janiss is missing, so no one is looking for her! It’s an interesting turning point including the real temptation to walk away…offered up by none other than the Devil in disguise.

So, what’s left to tell? Louisa and Timothy always had a plan for Cedarcrest Sanctum, and it may not be what you think. The final book is about relevance and dealing with immortality. While the story of Janiss is part of that, it’s also something that all of the characters will struggle with…and not everyone is going to make it. Sad? Yes, but also realistic. The tone of this series is and always has been there is no happily ever after – there is only what happens next.

One thought on “The Penultimate Matriarch: Revelations”