Every full moon, the wolf would appear to devour another sheep — it was the way of things.

Always at night and always hungry, the wolf would appear to chase the herd until one could run no longer. When it fell behind, the wolf took the weakest sheep into its powerful jaws and disappeared into the night.

While most of the sheep looked away, one did not. It watched, saw how frightened the other sheep were, and offered comfort to others.

But the wolf noticed the sheep that watched, and on the night when the moon became darkest, it came and took it away.

“Why do you watch?” the wolf asked, not yet having devoured the sheep.

“To understand,” it replied. “There must be a secret that can save us all.”

The wolf laughed. “I will reveal my secret, for it cannot save anyone.” With that, the wolf became a sheep.

“You’re one of us,” the sheep gasped.

“One need not be seen as a wolf all of the time, but it is ever what I am inside. You see such things and that is dangerous to me, but you will watch no longer.”

The wolf bit the sheep, and the sheep fell into a deep slumber.

When the sheep awoke, the wolf was gone, and so the sheep wandered back to the herd. No one in the herd had ever survived such an attack, and a few accused the sheep of bargaining with the wolf, for how else could it survive? The sheep denied the accusation but could not speak the whole truth, for it understood it would be shunned. 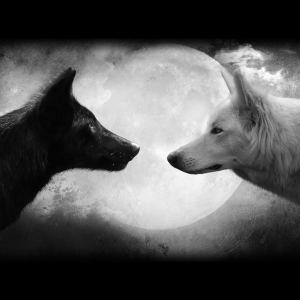 On the next full moon, the wolf returned. When the herd scattered, the spared sheep did not run.

“Join the hunt,” the wolf commanded, and the sheep became a wolf as well.

The fear from the herd was palpable upon seeing two wolves, and the sheep smelled delicious to the predators, but the new wolf turned and faced the old wolf down.

“Why fight me when there are sheep for the taking?” the old wolf asked.

The new wolf answered, “Because I remember being one of the sheep, and I will watch no longer.”

And it became the way of things.

It felt like a parable kind of day today.

You can buy an art print of the image here.

2 thoughts on “The Shepherd Wolf”